An interesting use case for the i.mx6sx is as vehicle diagnostic (or interface) adapter. In this blog I will demonstrate how we can re-purpose a UDOO NEO as a prototype diagnostic adapter.

The adapter targets VW vehicles supporting KWP2000 services. Typically an adapter requires a real time interface to the vehicle in order to keep the diagnostic session alive after establishing communications with an ECU.  The real time needs can easily be met on the M4 and we can exploit the A9 side to offer data transformation and API services, for example to make the data available a Mobile application. The end goal is demonstrated in the video where a custom developed Android Application retrieves diagnostic information from the vehicle in real time. The application communicates over Wifi with the NEO which in turn is connected to the vehicles OBD-II port. 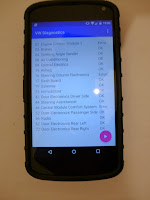 The application is first used to query the vehicle for a list of available ECUs (modern vehicles can contain tens of ECUs). For each ECU the physical address and overall status is displayed (OK or has DTC errors). 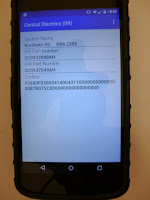 Subsequently after selecting an individual ECU the application retrieves information about the ECU including the short/long coding value (if applicable).

Although the video demonstrate a few KWP2000 services being invoked, its actually possible to invoke most if not all of the services available. Furthermore it could be enhanced to support UDS services. 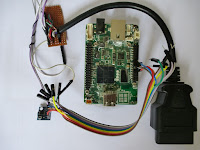 At a hardware level VW KWP2000 is supported through CAN (some older vehicles use K-Line) and is accessible through the vehicles on board 16-pin OBD-II connector. For the prototype (in the photo to right) the NEO is simply connected to a SN65HVD230 which in turn is connected to the CAN pins of the OBD-II connector.


Typically VW KWP2000 services are supported over VW's proprietary TP2.0 protocol. TP2.0 is used to establish a session and pass datagrams between 2 ECUs, one of which is our case is the NEO and normally referred to as the 'tester'. Implementing TP2.0 is a challenge as accurate timings are required to correctly deal with time out and error scenarios in addition to implementing logic to cater for varying ECU behaviours depending on their age.  Above TP2.0 is the KWP2000 protocol which implements a simpler request response model. As shown the diagram below a complete TP2.0 and KWP2000 stack was developed to run on the M4.

On the A9 side KWP2000 services are exposed through a custom API interface that when invoked communicate with the M4 over a bidirectional link. The A9 allows the data to be enriched and transformed eg XML/JSON before being exposed via a number of network interfaces such as bluetooth, wifi or even ethernet. For the demo its done by enabling a  Wifi Access Point on the NEO. For those sharp eyed readers you will notice the prototype uses a NEO Basic which has no on board wifi support, instead a wifi dongle was plugged into the USB port to create the Access Point.