In the last post we covered how the RX8 instrument cluster could be controlled from the A9 side. Given the A9 side is feature rich in its capabilities if offers numerous possibilities. As a simple demonstration we will attempt to replicate the RPM and Speed gauges and two warning indicators on the hdmi (720p) display to represent a simplified virtual instrument cluster. The main challenges here are:

In the video, the on screen RPM gauge (on left fairly) accurately tracks the RPM needle on the instrument cluster. The on screen Speed gauge (on the right tracks) the digital Speed indicator. We also toggle the battery and oil warning indicators on the screen and cluster. Notice that the cluster_gauges application is consuming rough 10% of the CPU.

In order to deliver the necessary performance the on screen gauges were rendered using custom Open GL ES 2.0 code. Note the graphic images used for gauges are modified versions derived from this Android Ardunio project. Compared to the previous post there is now a single application (cluster_gauges) on the A9 side which renders the widgets but also controls the instrument cluster through the M4.

I hope through these 3 blog posts have I managed to demonstrate how the M4 and A9 processor can be combined to provide a rich real-time interface and data distribution mechanism for your applications. 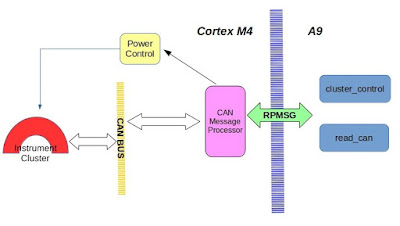 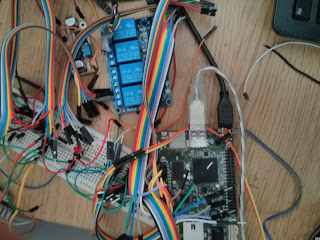 Now that we have the ability to control the cluster and receive messages from the A9 side, in the final post I will demonstrate how another feature of i.mx6sx can be used with it.
Posted by Jasbir at 10:41 1 comment:

One of the most promising capabilities of the i.mx6sx is combing the Cortex M4 with the on board CAN interfaces. This feature opens up a number of possibilities for deploying the i.mx6sx for a varied range of automotive solutions where real-time processing of CAN messages is handled by the M4 and the A9 kept for non-critical processing. To demonstrate this, lets take a simple use case of driving an automotive instrument cluster.  In a series of blog posts I will cover how we can drive the instrument cluster initially from the M4, then from the A9 communicating via MU (Messaging Unit) to M4 and finally by a on screen virtual dials mimicking the actual instrument cluster dials.

For this first demonstration a FreeRTOS application was developed to run on the M4 that regularly sends CAN messages to the cluster and dumped CAN messages generated on the bus from the cluster to the serial port. In order to drive the dials and suppress the warning indicators, the instrument cluster requires a regular feed of CAN messages sent at 10 milliseconds intervals. When the cluster is active it also generates CAN messages roughly at 50 millisecond intervals.

In the next post I aim to demonstrate how we can utilise the Message Unit to allow the A9 to control the instrument cluster by communicating with the M4.
Posted by Jasbir at 10:26 No comments: