Machine learning with the i.MX6 and the Intel NCS2


Last October Intel released a upgraded Neural Compute Stick known as NCS2 hosting the Movidius Myriad X VPU (MA2485). Intel claim "NCS 2 delivers up to eight times the performance boost compared to the previous generation NCS". Intel also provide OpenVINO an open visual inference and neural network optimization toolkit with multiplatform support for Intel based hardware. With release R5 of OpenVINO support was added for NCS2/NCS and ARMv7-A CPU architecture through the introduction of library support for Raspberry Pi boards. As a progression from my previous post this give us the opportunity test NCS2 with OpenVINO on the i.mx6 platform. The first video above is showing the sample security_barrier_camera_demo and second is running the model vehicle-detection-adas-0002.xml. These are executed on a imx6q board (BCM AR6MXQ).

To maximise performance from NCS2 ideally it should be connected to a USB 3.0 port. Unfortunately the i.mx6 doesn't host native support for 3.0 however most of the i.mx6 range do support a PCIE interface. So our plan was to deployed a mini PCIE to USB 3.0 card in our case using the NEC UPD720202 chipset. Using PCIE also alleviates saturating the USB bus when testing interference with a USB camera. 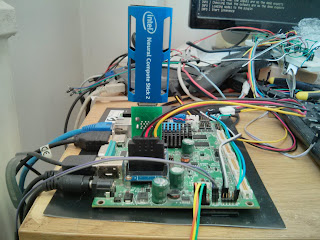 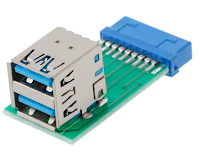 Target board for testing was the BCM ARM6QX which host on board mini-pice interface. The mini PICE card host a 20 pin USB connector and a SATA connector for USB power. We used an adapter card to expose two USB 3.0 ports hence the NCS2 ending up in an upright position. 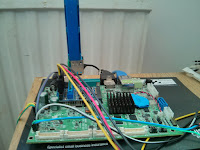 OpenVINO provides a easy to use interface to OpenCV via python and C++. In our case for a embedded platform C++ is best suited for optimum performance. Testing was done using a number of the existing OpenVINO samples with the primary code modification being to accelerate resizing the camera input and rendering of the OpenCV buffer to screen.

The face recoginition video above is using object_detection_demo_ssd_async with model face-detection-retail-0004.xml model and is rated 1.067 GFLOPs Complexitiy. NCS2 interference times average 22ms although the model lacks some accuracy with its ability not to distinguish between a human face and 'Dora'. The overall fps rate at 19 is pretty good. In regards to CPU usage on a i.mx6q only one of the 4 cores is fully occupied as suggested by the output of 'top'.

What is nice about OpenVINO is that we can easily compare these benchmarks against the original NCS by simply plugging in it and re-runing the test. 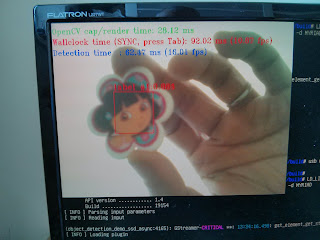 As shown above the inference times rise from 22 to 62 ms although from our testing the trade off seems to be a rise in power consumption and heat dissipation between the two releases of the NCS.