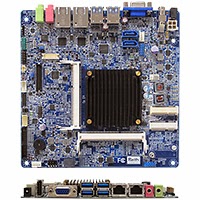 On the whole the results look very encouraging and the J1900 seems to offer a good trade off for a fan less solution with decent performance. Furthermore it should provide a relatively smooth route for application development. The main consideration is form factor and it is possible to find the J1900 in 3.5" SBC or Q7 form.
Posted by Jasbir at 06:39 No comments: