The preferred option for WIFI support with Gen 3 devices is to deploy a Particle Argon. The Argon consists of a Nordic nRF52840 paired with Espressif ESP32. The EPS32 simply provides the WIFI interface and is running a customised version of EPS-AT firmware (argon-ncp-firmware). The nRF52840 communicates with the EPS32 using one its serial ports using fours pins TX,RX,CTS & RTS. The challenge here was to see if we could enable WIFI support on Particle Xenon by connecting it to a ESP32 running the argon-ncp-firmware. As demonstrated in the video it was possible although it required a number of hoops to jump through.

Unfortunately the only spare EPS32 board I had was a LILYGO TTGO this is a 16M board with a OLED display. So the first task was porting the argon-ncp-firmware and re-factoring the pin mappings to support this board. Once this was complete it was fairly easy to validate the firmware was functioning by simply executing the AT commands the Argon issues to establish WIFI connectivity.

For the Xenon the primary changes were to port across the Argon EPS32 networking code. Which turned out to be more challenging that envisaged primarily because the Xenon firmware isn't expecting a WIFI configuration and the command line tools don't support provisioning a WIFI connection for a Xenon. After 4 weeks of effort I finally had built a working version of the Xenon firmware. It took another 2 weeks to get the Xenon provisioned  a WIFI configuration so it could connect to the Particle Cloud.

The main drawback of this approach is that is the firmware on the both the Xenon and ESP32 are customised therefore any updates from the Cloud would override the changes. Hence a customised rebuild is required when new firmware is released.

I liked to thank motiveorder.com for sponsoring the hardware and development time for this article.
Posted by Jasbir at 11:37 No comments: 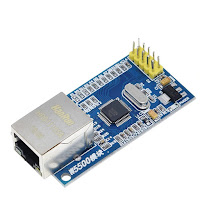 The preferred option to enable a Xenon to act as a Gateway is to deploy the Particle Ethernet FeatherWing. Unfortunately I didn't have one to hand, however after reviewing the schematics it turns out this FeatherWing simply relies on the WIZnet W5500 Ethernet controller.

From a previous project I did have a W5500 Ethernet Module (which seems to widely available and relatively cheap), so the challenge was to see if the Xenon could work it.


In the end it turned out to be relatively simple to connect the Xenon to the module through the exposed SPI interface. The back of pcb indicates the pin out details for the W5500. The diagram below details which pins from the Xenon connect needed to be connection W5500 Module. 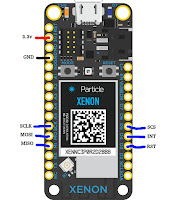 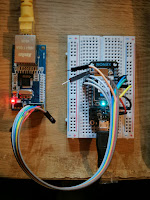 This post on the Particle site covers how to enable Ethernet and fingers crossed your Xenon should connect to the Particle cloud as mine did.