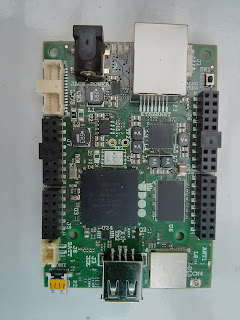 1. 2 x USB 2.0 type A connectors, for keyboard & mouse useful when used with HDMI.
2. 2 x Ethernet (definitely make it stand out from the competing SBCs).
3. Use SPI for FXAS21002C & FXOS8700CQ or ideally replace with 9 axis IMU.
4. I'd prefer the sensors to be on a separate pcb that can be connected via a jump cable to the main board. The main reason being that manoeuvring the board to test the sensors with the cables attached (ethernet, serial, power, usb, hdmi) isn't that practical.
5. On board JTAG support, it is very difficult to debug the M4 code without it!
6. There are two uart outputs, one for A9 serial console and other for the M4 on the NEO. Similar to the UDOO it would be very useful if these were exposed via single usb connector. In the current design you need to hook up 2 serial-to-usb adapters.
Posted by Jasbir at 03:55 3 comments: