Overall past few months there has been a huge amount of interest in the ESP8266 which offers a low cost Serial to WIFI solution. The introduction of the ESP8266 by Espressif coincidences with the increased hype of IOT (Internet of Things) as the next major emerging technology. Realistically IOT has been around for a decades in different disguises so the concept isn't new. I'm guessing the renewed interested is partly because sensors, processors and networks are dirt cheap and wireless technology is ubiquitous. Coupled with the rise of the maker culture it now means the cost of entry is low for connecting devices. The are numerous modules available that host a ESP8266 and these can be found for a few dollars, however most have limited pins broken out, UART plus some GPIO. In my opinion a better option is the EPS-201 which has a larger number of pins broken out and an external U.FL antenna connector (IPX antenna). With a slight modification the module can be made breadboard compatible.

The main drawbacks with the ESP-201 are:

1. Lack of CE/FCC compliance (the ESP8266 is not the module).
2. The pin marking are on the underside of PCB therefore not visible when sitting in a breadboard.
3. The UART pins protrude on the underside of the PCB which means it can't be plugged into a breadboard without bending these pins at a right angle (as shown) or ideally de-soldering the pins and re-attaching the correct way round.

To evaluate the ESP8266 I chose to integrate it with an existing wireless (868Mhz) set up which is used for monitoring a number of sensors as well providing periodic temperature readings.  The existing radio set up uses Ciseco's XRF  which hosts TI's low power CC1110 transceiver. It runs custom developed firmware that is controlled through one of the two CC1110 UART ports. The plan was extended the firmware so that CC1110 could be controlled over TCP by running a socket server on the ESP8266. Compared to the ESP8266 the CC1110 has a wealth of reference documentation which increases the options for interfacing with other devices in addition to easing the programming burden. The main drawback with the CC1110 is the cost of the development tools although it possible to use SDCC (Small Device C Compiler) as an alternative.

Initially I was hoping to use I2C/SPI as the interface between the CC1110 and the ESP8266. However due to the CC1110 not supporting hardware I2C and coupled with the fact that I had just a few free I/O pins remaining I was left with one option that was to use the second UART port. Espressif provide an SDK that can be flashed to the ESP8266 which provides a simple AT command style interface to program the device. Note, the SDK is continually being updated so check for later releases. One quirk with the ESP-201 is that is IO15 has to be grounded for the device to function. To flash the device IO00 has to be grounded. Instructions for SDK set up on Linux can be found here. To flash the AT firmware for SDK 1.0 on Linux we can issue the following command:

After flashing the ESP-201 the bulk of the coding was done on the CC1110 which mainly entailed sending AT commands to the ESP-201 to initial a connection to the,  launch a socket server and send updates from the sensors. The sequence of AT commands was similar to this:

After coding up the AT commands on the CC1110 I could test by launching a telnet session on port 80 to the ip address allocated via DHCP from the AP. Output sensor data from both the CC1110 UART port and ESP-201 is shown below. 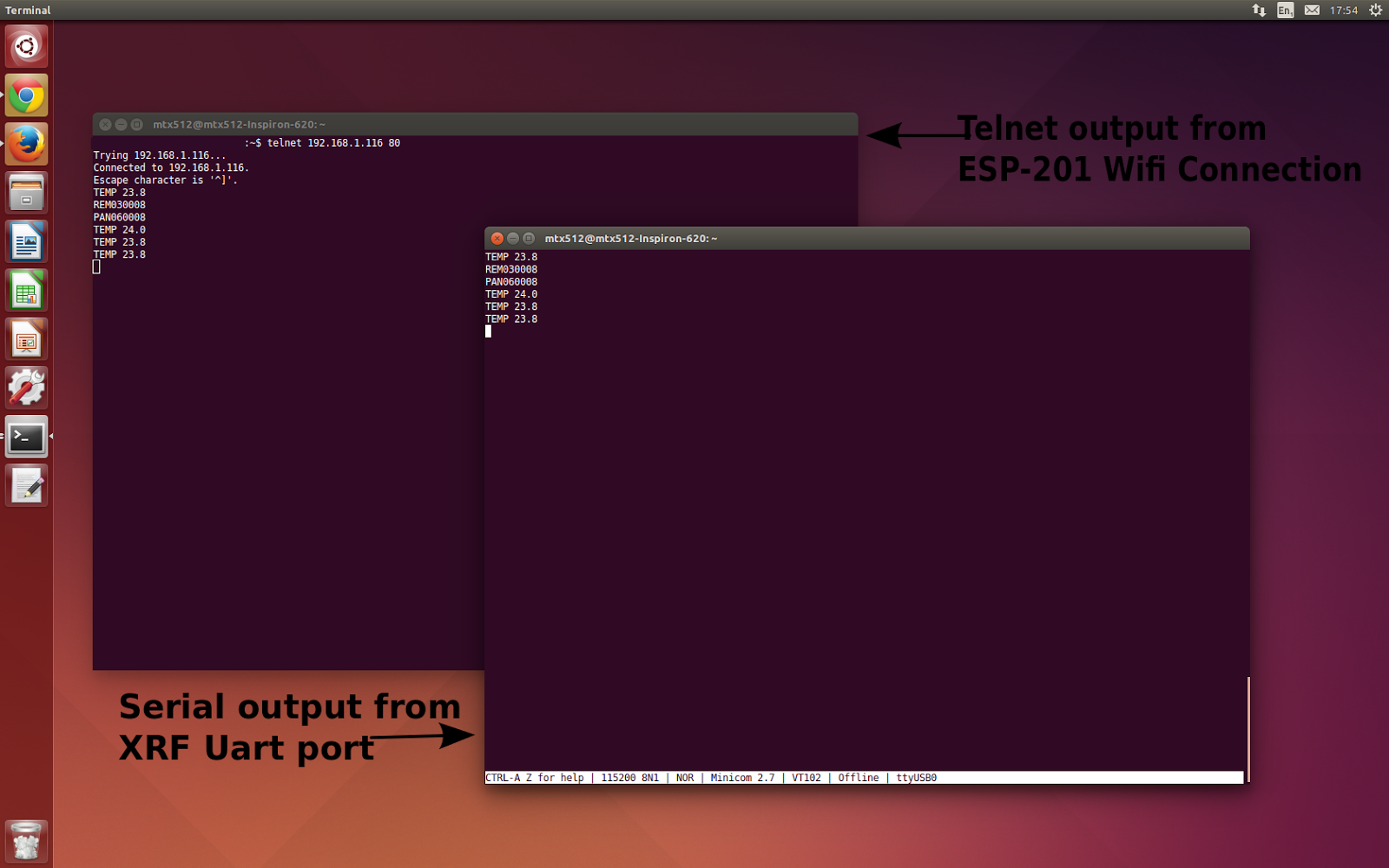 Coding the above highlighted a number of pitfalls with the AT firmware and hardware.


It is possible to write your own firmware instead of using the pre-built AT firmware, which in my opinion is a better option. Espressif provide a set of closed sourced C libraries which offers a finer level of control compared to the AT firmware. Having  spent a considerable amount of time writing custom firmware to interface to the CC1110, here's my findings:


Given the amount of attention the ESP8266 has received it is fair to say it does offer a low cost and rapid approach to prototyping a WIFI solution for existing hardware or for a new application. However you could argue that most of the attention has come from hobbyists and not commercial ventures. In my opinion I think it is worth exploring other WIFI SOC's that coming to the market this year such as:


Furthermore it still not clear whether WIFI (2.4GHz or 5GHz) is the ideal medium for wireless IOT as the wake up and connect times aren't particular quick. The other point to make is that cost of the some of the above SOCs can make them overlap with traditional networking SOC which are used in low cost router boards. One example is the AR9331 which supports a full Linux stack and can be used for video streaming or complex routing something the WIFI SOC's may find hard to achieve.