I took Toby's Linaro build for the MK802 and patched it to work for the Hackberry. Thanks to Tobay for the work he put into creating the build. 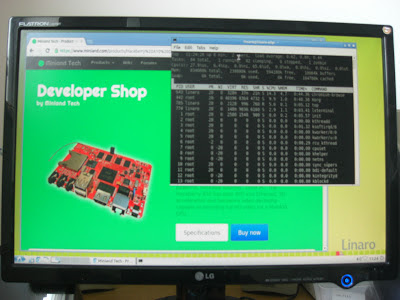 You have two options for getting an image to SD card:

The image is for the 1GB board and contains my latest uboot and a 3.0.36+ kernel compiled to work with the uboot. Kernel is now compiled with hard float resulting in improved performance. It is for a 4GB SD card but the ext4 partition is only 3.5GB. Note: not all 4GB SD cards are 4GB, they may be 3.7,3.8 etc which may mean your dd may fails early. However since we only use 3.6GB hopefully it is ok. If it fails to boot try a 8GB card if you can or re-adjust the partitions on linux after creating the image.

2. Build from scratch as below:

Download my uboot files sunxi-spl.bin and u-boot.bin from here.

Use the boards existing script.bin or download from here script.bin.

I suggest building a kernel to ensure it works with uboot files and copy that across to the SD card.
Remove SD card and re-insert to mount drives.

Replace existing evb.bin on fat16 partition with your script.bin, eg on ubuntu do:

Now to test it boots:

Remove SD card and place in hackberry, connect hdmi cable to your TV/monitor and boot. Fingers crossed after a while the linaro desktop should appear. Plug in a usb mouse & keyboard and away you go.