After setting up the Access Point, I'd thought I would devote some time on integrating the Nano alarm panel with the Hackberry. The end goal was to arm/disarm from my Andriod phone within the vicinity of my home by connecting to the access point.


For those that don't know the Nano alarm panel was my attempt to interface with my wireless home alarm system. The Nano is based on Ciesco's underrated XRF module and uses the TI CC1110 chipset. The CC1110 combines RF with an 8051 mcu and offers an number of features including gpio, spi, ic2, a12 bit-adc and uarts. As a side note the XRF has reportedly reached a range of over 1Km over 868Mhz. I've written custom firmware that is deployed on the XFR to decode the wireless alarm protocol and to communicate with the Hackberry. As the CC1110 has no usb interface (unlike the CC1111) I decided to interface using the CC1110's uart interface. The Hackberry is easily interfaced to the XRF using a serial ttl-usb adapter (in my case a CP1202). Later on I might explore the possibility of using the hackerry's on-board serial port because it is voltage compatible. The added advantage of the serial ttl-usb adapter is that I can also power the XFR through adapter as the CC1110 is a very low power device. 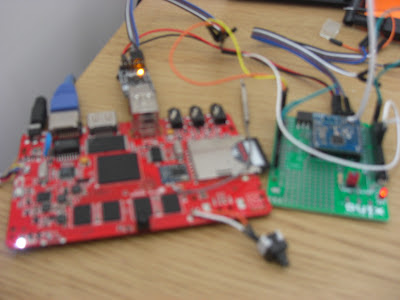 The Hackberry is deployed with lighttpd along with some custom php scripts and c code to read/write commands via the serial port to the XRF. To test the stability of the Lubuntu build I've also deployed mysql and included addition code to capture all alarm sensor triggers and periodically record (every 5 mintues) the ambient temperature as reported by the CC1110. The plan is to leave this running 24x7. As side note I found that minicom fails to work with the usb serial adapter (/dev/ttyUSB0) but I found a replacement microcom (apt-get install microcom) that works fine.

Currently lighttpd presents a simple page which can be viewed in the phones web browser displaying the 3 buttons to arm (red) , part-arm (yellow) or disarm (green). Longer term the intention is to develop an android app to by-pass lighttpd. Here's a badly made video showing it in action next to the alarm panel.